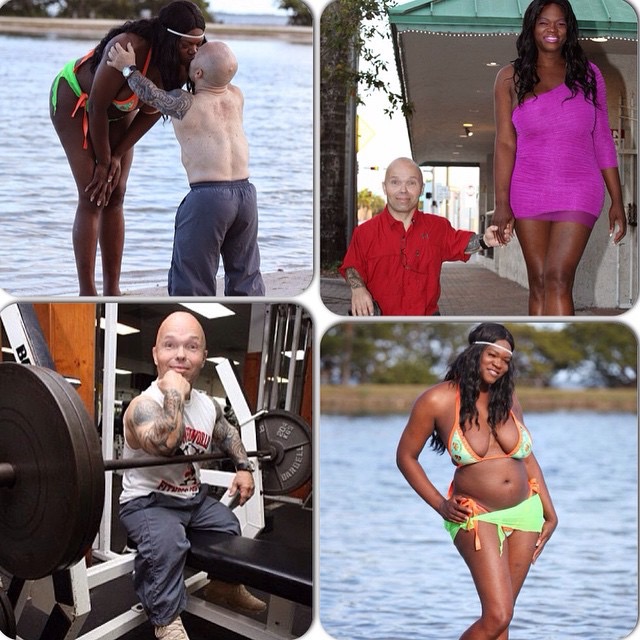 A 4ft 4in tall dwarf who claims to be “the strongest man in the world” has revealed he hopes to break down further barriers by marrying his 6ft 3in transgender girlfriend.

Anton Kraft has smashed records for weightlifting by being able to lift four times his own weight, but the determined 52-year-old has told how his greatest achieving was bagging his glamorous new love.

The bodybuilder, who is originally from Denmark but now lives in Florida, said he instantly fell for China Bell, despite the fact she was originally born a man.

“Florida is one the states that have same-sex marriage – and both of us are basically the same sex.

“I enjoy dating a transgender woman because she was born a male and is doing the utmost to become as feminine as possible.

“I find that most women born as women do not spend as much time on their appearance.”

The couple has been dating for six months and China told how she found her new love irresistible.

She said: “I think Anton’s weightlifting is so sexy because I think he’s sexy – when you hold a world heavyweight title, that means a lot.

“I’ve never dated a 4ft 4in guy and I was just so curious. I’m glad I gave him a chance because he’s an amazing person.

“I’m different and he’s different, and where we’re from, different is good.”

The sculpted figure that China finds so attractive, was earned by Anton through 10 years of hard work power-lifting.

He claims to have the highest bench record of all time for his weight class, but it seems he may have pushed his body too far. In his pursuit of ultimate power he says he has ‘technically died’ five times before being resuscitated – ranging from drowning to falling out of a window.

Doctors also fear he may have a heart attack if he keeps up his all-action lifestyle – but Anton isn’t budging.

He said: “Some people say that what I do is weakness, or micro-man syndrome – that I want to do something that I am not built for, to prove something.

“But I believe there’s only one winner – second is first loser. Second doesn’t count.

“Overall, I am one of the five strongest guys in the world, regardless of height and weight.

“And I am the only guy in the world who has ever benched four-times his body weight.”

And when it comes to the future – Anton’s ambitions are as big as his weightlifting abilities.

He said: “I want to break another world record, but it’s up to my physique to decide that.

“I may also go down on one knee and ask for China’s hand – because I think her name would look so good with my last name.

“Right now I feel like I’m the luckiest man on the planet – we are all happy and good and I have never felt better than I do now – and that would be thanks to China.”

BRAVEHEART 1995: LIVE IN PRESENT, MAKE IT SO BEAUTIFUL

Value Your Life And Have The Real Meaning of Happiness